Nowadays, seemingly most of the anime that airs in Japan is via late-night airplay, i.e. from 23:00/11:00 PM-4:00 AM. Sure there are shows that air in the morning, prime time, & probably even some in the afternoon, but late-night is where anime has found a very consistent home. But there's one main reason why late-night has been the home of anime for nearly 15 years: Home video sales. Though there was anime that aired in late-night time slots before, like Sennin Buraku in 1963-1964, Lemon Angel in 1987, and Super Zugan in 1992, they were all titles aimed squarely at adult audiences who were likely to be up at those late hours in the first place. Late-night anime as we now know it came about in the mid-90s with the end of the OVA boom that started up back in the mid-80s with Dallos; as less people bought anime that was specifically made for VHS & LD, anime studios had to think of a new way to get the attention of potential buyers.

Well, to make a complex story short & easy, otaku were watching late-night televised radio programs done by seiyuu (commonly called "aniraji", a combination of anime & radio), so TV producers & anime studios thought that maybe that audience would be interested in watching anime made specifically for those late time slots, and therefore they would likely be interested in buying the home video release that would come out shortly after the show was fully aired. Essentially, the short OVA was expanded into a late-night anime "infomercial", and it's been like that since 1997. But I'm not here to talk about the history of late-night anime, especially since that requires going into anime that airs on UHF channels, subscription channels like WOWOW, and Pay-Per-View. Instead, just for the hell, of it I'm going to take a rough look at what aired in those first two years (i.e. 1997 & 1998), and I'm going to focus specifically on TV Tokyo's offerings, since they were the first to do late-night anime as we know it. But in order to get started, we have to go back to late 1996, which is when the very first "modern-day" late-night anime aired, and that title was... 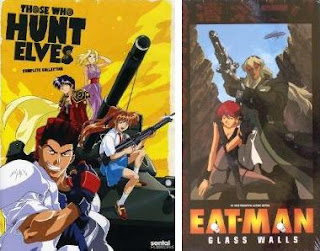 Those Who Hunt Elves, which took the place of live-action variety show MEN-Ki, which starred comedian Unlucky Gotou. Yu Yagami's story of three humans & one Type 47 tank that get transported to a world filled with elves whom they must strip in order to find the five fragments of the spell that can take them back home was the first late-night anime of its kind, airing every Thursday from 25:15 - 25:45/1:15-1:45 AM... And with such a ridiculous premise there's no way it could have ever aired on any other time slot, even if the stripping is more comical & not risqué at all. TWHE aired from October to December of 1996, and after that ended in its place came a show that was nothing like it at all: Eat-Man, which aired from January to March of 1997. I've brought up the original Eat-Man anime a couple of times on the blog, and it really seems more like, instead of wanting to adapt from a popular manga, director Koichi Mashimo had these short stories he wanted to tell, and Eat-Man's Bolt Crank was just the perfect figure that he could tell these stories through; an artistic & esoteric title like this wouldn't have ever been picked up for a normal time slot. Now, while the show is excellent in its own way, this didn't really please fans of the original Eat-Man manga who wanted an actual adaptation, but it was still a reaction that meant that people were watching these brand-new shows, so naturally TV Tokyo decided to expand this whole late-night anime idea by not only having something air after this time slot, but to also use this original time slot every Monday & Wednesday; from what I could find, late-night Tuesday & Friday weren't used for anime yet. Because of this we now get four slots to talk about, so let's start with what looked to be the shortest-lived slot, Wednesday.

From what I could find on Japanese Wikipedia, where most anime pages feature a neat table of what aired before & after it on TV in that time slot, TV Tokyo's initial Wednesday 25:15 slot didn't last long for anime, showing only three titles. The first was Maze, the expanded 1997 retelling of the 1996 OVA about a girl who gets transported into a fantasy world and every night she turns into a lecherous man. Again, this title likely wouldn't have been accepted in any other time slot and it was even longer than the two shows that predated it, airing from April to September of 1997. After Maze would come Next Senki Ehrgeiz, and here is where we get a case of an anime that didn't really need a late-night slot. Yeah, Ehrgeiz's animation is low-budget, but nothing about the title itself really comes off as something that would have kept it from airing on a more traditional time slot. If anything, Gundam X's poor reception on TV Asahi just a year ago likely made TV Tokyo hesitant to put a mech anime on a similar slot, so Ehrgeiz went late-night, airing from October to December of 1997. Finishing this slot off is El Hazard: The Alternative World, the last entry in the El Hazard series, which aired from January to March of 1998. In this case, putting the show on late-night was likely done simply due to the fact that this was a sequel to the OVAs that predated it, which themselves were an alternate telling of El Hazard: The Wanderers, which aired on TV back in 1995-1996. At this point the series was already made for the otaku audience, so even if the content wasn't anything different from the normal time slots, the fanbase was watching at late-night.


TV Tokyo's Monday equivalent anime slot, which took the place of non-anime show Ganbaru!, did last for a bit longer, and here we finally see titles that were never licensed for release here in North America. Just like Maze, the anime adaptation of Weekly Shonen Jump's Hareluya II BØY aired from April to September of 1997, and is likely the very first Jump anime adaptation to air at late-night. Normally, Jump anime adaptations tend to be very friendly to traditional time slots, but BØY is essentially a delinquent title, and I honestly think that BØY is the only delinquent anime TV series, since other big delinquent titles like Rokudenashi BLUES & Crows only went as far as anime movies & OVAs. Sure, Beelzebub can also be considered a delinquent title, but Beelzebub is also a gag title, which does get regular time slots. Also, BØY is a great example of how late-night anime also acted as great promotion for music artists. Eat-Man did it first by having opening footage that was literally nothing but credits while the opening theme played, but BØY took it the next step by not only having it's opening theme, both ending themes, and six (!) insert songs all be by the same group, but the first ending's video footage was literally nothing but the actual group playing their song, music video-style. Luckily, after the first episode, the producers realized how silly this was and decided to have the first half of the footage be scenes from the episode that played, leaving the music video for only the second half, and the second ending theme footage was all about the show. Right after Hareluya II BØY came the Vampire Princess Miyu TV series, which aired from October of 1997 to March of 1998. I haven't seen this show myself, but hopefully the show used its late-night slot to maintain some of the darker elements that the original OVA seemed to have; the fact that it was directed by Toshiki Hirano, the same man who directed the original OVA, should only help it out. After Miyu came Nazca, which aired from April to June of 1998, was licensed and released in North America by Geneon Entertainment back in 2000 (when they were still Pioneer), & was promptly forgotten. Already it's getting kind of obvious that the Monday slot was used for more experimental stuff, and what came after Nazca just proves it all the more.

The psychological series Serial Experiments Lain aired in this Monday time slot, airing from July to September of 1998, and is likely the most well-known title that has come from this slot. I think many people know about Lain, so I don't think I need to talk about it, so instead let's move on. It's kind of hard to follow off of Lain, but St. Luminous Mission High School more than likely tried, airing from October to December of 1998... What, you never heard of St. Luminous Mission High School? I can't blame you if you haven't, as it has easily one of the most generic titles in the history of anime. I haven't seen it myself and, from what I can tell, it's essentially a harem anime that mixes in a missing person mystery. It also features an extremely early song from Ali Project as its ending theme, though you wouldn't know it at first listen since it sounds nothing like what an Ali Project song has sounded like for the past, oh, ten years. Really, listen to it for yourself and see how weird it is to hear Ali Project sound "normal". From what I could tell, the Monday slot would continue into 1999 with Space Pirate Mito, Season 1 of Jubei-chan - Secret of the Lovely Eyepatch, and then Season 2 of Space Pirate Mito (released in North America under the title Aoi & Mutsuki: A Pair of Queens), before I literally saw a "?" after Mito Season 2. So I'm going to guess that this Monday slot, with all of its experimental titles, also saw its end after October of 1999, when Mito Season 2 ended.
-----
And that ends Part 1 of this look at how "modern-day" late-night anime got its start. Out of what was covered only two titles never saw a North American release, and in Part 2, which will focus on what came directly after Those Who Hunt Elves & Eat-Man on Thursdays, we're going to see that we honestly got most of these early entries in late-night anime. Remember, late-night anime didn't exactly become a big thing yet and, for the most part, TV Tokyo was alone in doing this for the first two years, which is why I decided to focus on 1997-1998. See you all in Part 2.
Posted by George at 9:33:00 PM