Cipher the Video: It Has "Footloose" In It... All Complaints Are Null & Void!!!

California Crisis: Gun Salvo may definitely be a product of the 80s OVA boom, a.k.a. "The Golden Age of Anime", but even with it's one-of-a-kind visuals it's not one of the downright oddest products to come from this era. No, that title belongs to a short OVA adaptation of a shojo manga that's not just extremely 80s in its style, but also even more America-loving than California Crisis. 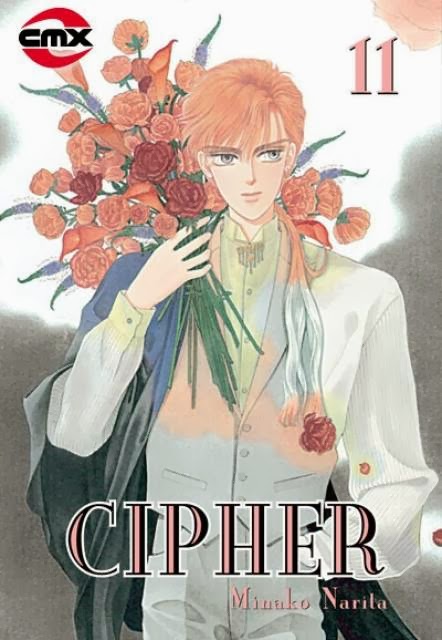 Debuting in December of 1984, Cipher by Minako Narita was a true oddity among shojo manga in general, let alone its co-runners in Hakusensha's LaLa magazine. While manga certainly could take place in the United States, Cipher was definitely drawn & written by someone who absolutely loved the country, especially what was going on there during the 80s. In fact, when Jason Thompson covered it in his House of 1000 Manga article, he outright called Cipher "The Most '80s Manga Ever." If anything, though, that sheer foreign-ness of the manga let it live a while in LaLa, with it ending in October of 1990 (right before the 90s would make the 80s look stupid, ala the 80s vs. the 70s, right?).  Astoundingly enough, this manga actually came over to the U.S.! The now-defunct CMX, which was DC Comic's attempt to bring over manga, ended up being a haven for old-school shojo manga, & from late-2005 to early-2008 they released the entire series, at least I think they did; CMX called Volume 11 the "final volume", but in Japan it was 12 volumes. Anyway, in March of 1989 animation studio Magic Bus & Victor Entertainment released Cipher the Video... And a simple description of this OVA just can't do it justice. 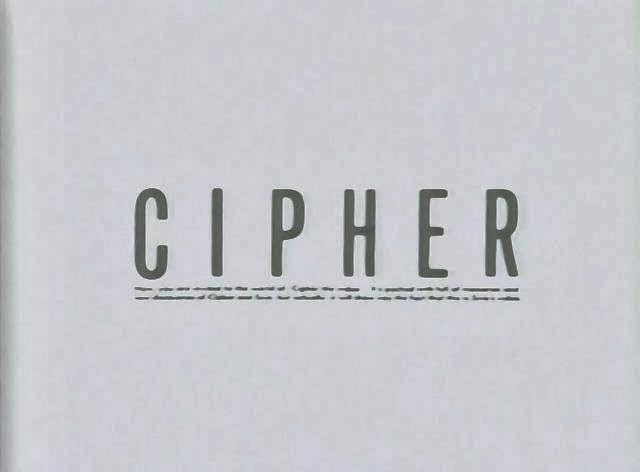 Seriously, if you want an actual description as to what Cipher's story is, just read Jason's article, because Cipher the Video doesn't explain it one bit. For a basic idea, it's about twin boys, Cipher & Siva, who are both actors, models, & students, but the two trade off who does the acting/modeling & who goes to school, with everyone thinking that they always see Siva. In turn, this OVA is purposefully done in a "MTV Interview" style (you know, back when the "M" actually stood for "Music"), with music videos happening in between each interview segment that keeps everything tied together. Since it's so completely unlike anything I've ever reviewed I feel it's best to simply cover each portion of this OVA in order. Let's get started...

Only in the 80s could an anime like California Crisis: Tsuigeki no Hibana (which translates to "Gunfire Pursuit", but everyone likes using "Gun Salvo") be made. The 80s is often referred to as "The Golden Age of Anime", and can agree to that for my own reasons, and California Crisis is proof positive of that term. This was a decade where literally anything could be made into an anime as long as one had an idea, access to an animation studio, & money to spend... And in 1980s Japan money was easy to be had. Now, yes, that means that there's a lot of random OVAs from this decade, many of which are simply average at absolute best, but from a creativity standpoint the 80s OVA boom was that very "Golden Age". This specific production from 1986 represents both the best & the worst of said OVA boom, but it sure has a metric ton of fun doing so. 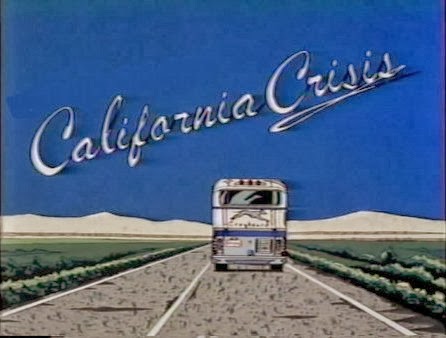 Noera is a simple man who works a simple job in the San Diego area. One morning on the drive to work he meets up with Marcia, a feisty girl on a motorcycle, before the two get stuck between a car chase between a van & a couple of big rigs. One of the big rigs goes off the cliff, along with Noera & Marcia, and before it explodes Marcia decides to take what was inside the trailer: A large black orb that, when touched by the two, shows a landscape of Death Valley. Marcia insists on going there to solve this mystery, and Noera essentially has no choice in the matter because the two are being chased by the local air force, where Noera's friend Jack Varo works, & some Kremlin agents, both of which want the "Space Mind", a.k.a. the orb Marcia stole.

The 00s ended with Imagawa becoming like that of Icarus, reaching for the sun but only getting burned & falling back to the ground. There would be no "Great-hen" for Shin Mazinger and he was seemingly no longer needed or wanted as a director. Therefore, Yasuhiro Imagawa decided to make the beginning of this new decade, the 10s, about something else...

I've mentioned it before, but one consistency of Imagawa's career has been the fact that a number of his works have become more beloved & respected as time has gone on. By the time 2010 came around just about every single anime he had ever worked on had seen release on DVD or even Blu-Ray; Hareluya II BØY, outside of the first episode, still remains VHS & LD-exclusive to this day. Along with that came things like video games, especially the Super Robot Wars Series, which kept some of his directorial work in the minds of anime fans & reminded them of why they enjoyed his work in the first place, or even introduce them to something they had not seen back in the day. For one show in particular this renewed appreciation & celebration allowed Imagawa to do something he had not done before: Retell a story without limitations like episode length or final episode count.

Previously on The Imagawa Chronicles:
"The 80s was a complete learning experience for him... he showed that, when put in the director's chair, he can make magic. The 90s, then, was Imagawa putting everything he learned into action, while showcasing his own creative skills as a storyteller."

If the 90s was Yasuhiro Imagawa's peak, then the 00s was definitely the "drop". It wasn't a bad time for the man by any means, but at the same time none of his works, especially those he directed, have become considered "classics" the same way Giant Robo & G Gundam have become. In fact, Imagawa may have sabotaged himself, so to say, because with the new millennium came a new Imagawa; one that defied expectations & did what he wanted. But, remember, just because a time in a man's career may be "forgotten" it doesn't mean it was subpar by any means.

In the year 2000 the anime industry was definitely a different world than it was in the decades prior. Digital animation was becoming more viable & slowly overtaking cels, the OVA market was all but dead with the advent of late-night anime, and "anime" itself seemingly lost its innocence through real-life tragedies like The Otaku Murderer & even productions like Neon Genesis Evangelion and Revolutionary Girl Utena. After doing the short-lived Pet Shop of Horrors anime in March of 1999 Imagawa took a few years off & in 2002 came back with a creation of his own, one that was both an anime & a manga. But instead of an over-the-top mecha epic that he made his name on a decade earlier, Imagawa debuted... A comedy series starring a girl who's her own Seven Dwarves.

The Imagawa Chronicles Part 2: An Era of G

Previously on The Imagawa Chronicles:

"To this day Mister Ajikko is likely the most successful & inspirational anime that Yasuhiro Imagawa ever directed, with the 'reaction' being utilized in cooking anime & manga ever since... But, let's face it, these early days aren't what people think of when they hear the name 'Yasuhiro Imagawa'..."

Welcome to the 1990s. For Yasuhiro Imagawa this decade would be defined by the 7th letter in the English alphabet.

In late 1989 Mister Ajikko ended after 99 episodes, making it the longest weekly anime production Imagawa has ever done. In his debut as director he created what is possibly THE iconic cooking anime, but it was based on a manga; there was an existing story to go off of. Lucky for him, in 1990 he was approached by Yasuhito Yamaki (producer of Ninja Resurrection & the Urotsukidoji OVA series) about making an anime adaptation of Mitsuteru Yokoyama's Giant Robo. Imagawa, being a fan of Yokoyama's works, couldn't say "No" to such an offer. This moment marked the beginning of the single longest production Yasuhiro Imagawa has ever worked on, and is still considered to be one of his most iconic.

Interestingly enough, during pre-production Imagawa was informed that, while lead character Daisaku, the Giant Robo itself, & villain Big Fire were good to go, he could not use any supporting characters from the original manga or the live-action TV series (known in America as Johnny Sokko & His Flying Robot), but he found a solution to this odd situation. With permission from the man himself, Imagawa decided to fill in the supporting cast with characters from Yokoyama's entire catalog of manga, with the likes of Mars, Romance of the Three Kingdoms, & Suikoden getting taken from the most; a few original characters rounded everything out. This transformed Giant Robo the Animation: The Day the Earth Stood Still from a simple manga adaptation into a celebration of the entire career of Mitsuteru Yokoyama. Taking place in the near future, a group of scientists discover a new form of clean, renewable energy, creating the Shizuma Drive (named after one of the scientists). Unfortunately, the villainous BF Group want control over the Shizuma Drive in order to lead mankind to absolute ruin. To combat them is the International Police Organization/IPO, which have the Experts of Justice, super-powered warriors who combat the BF Group's Magnificent Ten, who are similarly super-powered. Though young Daisaku doesn't have powers he can command & control Giant Robo, a colossal mecha built by his father before the BF Group killed him.
Read more »
Posted by George at 6:19:00 PM No comments:

The Imagawa Chronicles Part 1: The Sun Rises! A Classic Is Born

One thing people have to remind themselves is that not every great creation is technically "successful", at least in a monetary sense. Likewise, some creators can become beloved by many & create some of the best stuff in the medium he/she works in, yet almost none of those works are actually "successful". In the anime industry there are a few names that fit the latter nicely, but probably one of the most respected names in this category is also one of the (seemingly) most money-toxic directors ever: Yasuhiro Imagawa. 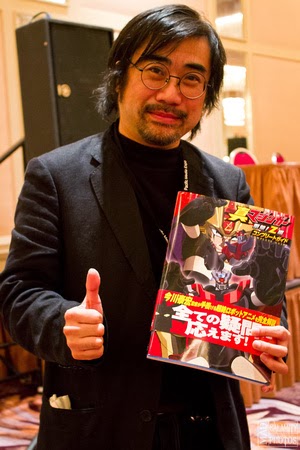 Born July 24, 1961 Yasuhiro Imagawa is now a celebrated anime director who has a number of classic series on his resumé, but there's one problem: He's a master of cult-classics. You know, titles that are generally agreed to be of great quality but are usually hidden in the shadows of more well known works.  Now, just so people understand, I don't mean the term "money-toxic" to be a derogatory term, but it's an unfortunate truth that few of Imagawa's works are actually financially successful... And those successful works of his are mostly due to him not being the director. Yeah, everyone praises Imagawa's directorial skills but he's also a well-versed screenwriter who actually gets more jobs under the シリーズ構成/Series Kousei, or Series Composition, title. This is essentially the equivalent of a "head writer" & is usually the only other person from the production staff, after the director, who actually gets royalties after production is finished. With Imagawa's first directorial gig in five years being just announced I think now is the best time to go over his entire career up until this point.  These are...

Yeah, it's simply a "The/Th" emblem I found online, some MS Paint text, & part of the White Knight Chronicles logo... So sue me.
Read more »
Posted by George at 4:10:00 PM No comments: