Saiyuki Reload Blast: Guess Who's Back, Back Again... Sanzo's Back, With His Friends...

Kazuya Minekura's Saiyuki has had the reputation of being a journey that's taken "forever" to actually get to its destination, whether it's due to the anime adaptations relying on tons of filler to pad out their lengths or Minekura herself putting her manga on hiatus (though, in her case, it was due to harsh illness & injury). In its home country, however, the production of anime adaptations has actually been semi-consistent, at least in terms of how long it takes for a new anime to be made & see release. From 1999 to 2004 there was essentially a yearly supply of productions (the "Premium" OVA, Gensou Maden, the Requiem movie, Kibou no Zaika, Reload, & Reload Gunlock), and afterwards it took three years until the Reload -burial- OVA saw release in 2007 (with one release happening in early 2008). Following that it was another three years-ish for the Saiyuki Gaiden OVA to come out in 2011. After that was the special extra episode of Gaiden in 2013, two years later, & then after yet another four years the series returned to TV. Airing during the Summer 2017 season, Saiyuki Reload Blast takes its name from the currently-running third manga series, which Minekura announced right away as being the final part of the Sanzo Party's mission to stop the revival of Gyumaoh. Obviously, this 12-episode TV series can only cover so much, but was Saiyuki's return to TV worth continuing where everything left off at, or should it have just simply rebooted everything from the start & been more welcoming to newcomers? 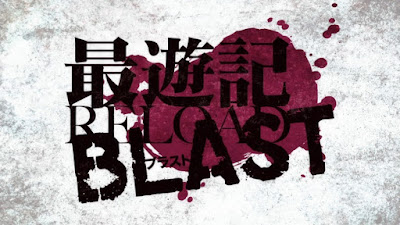 It's been two years since Genjo Sanzo, Son Goku, Sha Gojyo, & Cho Hakkai were ordered to head to India in order to stop Gyokumen Koshu from reviving her husband Gyumaoh & unleashing the "Minus Wave" calamity that drove the yokai of Shangri-La crazy. After all this time, the Sanzo Party have finally entered the West, with everything being not just culturally different from what they're familiar with (Sanzo in particular has next to venerability this far out), but also much more ruthless when it comes to yokai attacks; the wave is so powerful here that even half-blooded Gojyo is at risk. Eventually, they come across Sharak Sanzo, the guardian of the defensive Kouten Sutra, but when War Prince Nataku of the Heavenly Realm, who defeated Gyumaoh 500 years ago, decides to come to Earth, does this mean that the Sanzo Party's "employment" has come to an end?

Saiyuki Gaiden: I Want to Get Away to Our Sweet Escape...

When Kazuya Minekura debuted Saiyuki in Enix's Monthly GFantasy back in 1997, it became a fast hit, which allowed her to expand on the lore of the world she created. Two years later, in mid-1999, Minekura debuted Saiyuki Gaiden, a prequel manga that took place 500 years prior in Heaven. At this point, Minekura had given indications that Son Goku had been locked in his mountainside prison for the past half-millennium due to something he did while in Heaven (which is accurate to the original novel), & that Sanzo, Gojyo, & Hakkai were in fact the reincarnations of the people who befriended Goku all those centuries ago. Being a side story manga series that was produced alongside the original manga, Saiyuki Gaiden would see multiple hiatuses, as well as moving over to Ichijinsha's Monthly Comic Zero-Sum in 2003, before finally being completed in mid-2009, totaling nine volumes. 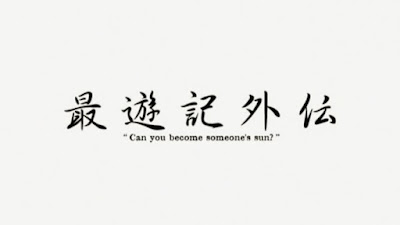 Technically, the first time Saiyuki Gaiden would be adapted into animation was during the Homura Arc, a filler storyline which made up the entire second half of Gensou Maden Saiyuki. Since Homura wanted vengeance for what happened over 500 years ago, it only made sense to adapt a small portion of Gaiden that was made at points during that story arc. After that, the side story would remain manga-exclusive until 2011, when a three-episode OVA adaptation came out, featuring animation by a new studio named Anpro; Studio Pierrot did help produce the OVA, however. A year later, Sentai Filmworks would announce a North American release for the OVA series, complete with ADV's dub cast for the Sanzo Party reuniting for the first time since early 2005, when Saiyuki Requiem came out; Geneon's dubs for Reload & Reload Gunlock used a new cast via Bang Zoom! Entertainment. Sentai's DVD release for Saiyuki Gaiden would come out January 2013, but later that year a special fourth episode came out in Japan, instantly making Sentai's release a little incomplete. Anyway, enough backstory about the backstory, so let's see if this backstory actually adds anything to the main story.

The Sutural Sutra of Saiyuki: Can You Just Skip the Filler?

Kazuya Minekura's Saiyuki has been running on & off ever since 1997 via three series of manga, Saiyuki, Saiyuki Reload, & Saiyuki Reload Blast, and that's not counting prequel series Saiyuki Gaiden & Saiyuki Ibun, which both ran during the main series' runs. Since it became a rather fast success, it eventually got adapted into a TV anime in 2000, a couple of years before the original series came to an end in 2002. Due to a mix of not wanting to catch up to where Minekura was in the story & the franchise in general being really, really popular, especially with female audiences, the Saiyuki anime adaptations have become one of the most infamous examples of staff creating their own anime-original stories, which are often colloquially referred to as "filler", since they tend to do nothing but pad out overall runtime. In fact, according to the Saiyuki Wiki, out of a total 101 episodes spread out across three TV anime (not counting the Saiyuki Reload Blast anime from 2017), only 36 episodes actually adapt from the first two manga series; yes, just barely over a third of the anime is accurate to the manga. Over the years, I've managed to get all of the DVDs ADV & Geneon released for these original three anime series, and I've always wondered something: Can you actually just skip the filler & watch the manga-accurate episodes as a proper adaptation of Minekura's manga? 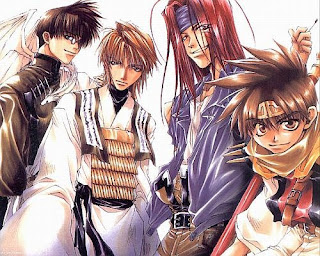 You see, filler comes in a variety of ways, but can be categorized into two primary forms that I've given names to. One form is "intrusive filler", which is when the original content mixes into the adapted content, making it effectively impossible to ignore or simply skip over. This can either be beneficial & expand on established story, like how Fullmetal Alchemist [2003] actually showed Basque Gran's death (whereas the manga simply referred to it), or it can be detrimental, like how Saint Seiya's early filler actively changed the way the plot actually happens when compared to the manga. The other form is "passive filler", which is when the original content is self-contained & doesn't really affect the adapted content, outside of maybe said original content being referenced to after the fact. This is usually the more common form of filler, as it allows for things like "filler arcs", which tend to not really interfere with the manga story too much (if at all) & act more like side stories; there are exceptions, though, like the end of Saint Seiya's Asgard Chapter tying into the manga-adapted Poseidon Chapter. Therefore, I decided to experiment & took note of which episodes of 2000's Gensou Maden Saiyuki, 2003's Saiyuki Reload, & 2004's Saiyuki Reload Gunlock are adaptations of the manga, and by only watching those episodes I want to see if Minekura's story is told with little to no interference from the filler.

Are you ready, you hellions?

Saiyuki Requiem - The Motion Picture: "Open Up Your Mind" to a Different Side of Saiyuki

Welcome, reader, to The Land of Obscusion's 2018, which is the "Year of Unfinished Business". Such an endeavor can be compared to a massive journey, one where I look back at what I had written about during the previous seven years, and see what I ignored, missed out on, or simply forgot to cover. In fact, one could call this a "Journey to the Max", so what better way to start out this year of returning to previous series & creators that I had once covered than with Kazuya Minekura's Saiyuki? 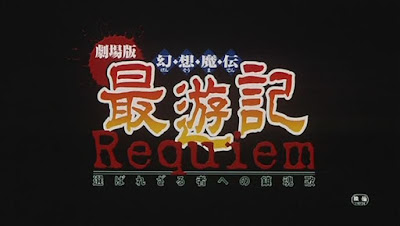 Over the course of a little over a week at the end of August 2012, I reviewed the three Saiyuki OVAs that had never been officially licensed & released in North America: 1999's Saiyuki "Premium" (which pre-dated the TV anime), 2002's Saiyuki: Kibou no Zaika (an interactive OVA, though I watched a bootleg that removed the interactivity & likely didn't give me the best ending), & 2007's Saiyuki Reload -burial- (which adapted the flashback arc of the same name from Saiyuki Reload). To this day, none of these OVAs have since been licensed, which is sad (especially for the last one) but understandable. That being said, there are two other non-TV Saiyuki productions out there, both of which did see license & release in North America, so let's see if I missed out by not including them in my coverage over five years ago. Up first is Saiyuki Requiem: Requiem for the One Not Chosen (yes, it is that redundant), simply titled Saiyuki Requiem - The Motion Picture by ADV, the franchise's sole theatrically released movie from August 18, 2001, a few months following the end of Gensou Maden Saiyuki, the first TV series.

After taking out a small army of crazed yokai, the Sanzo Party get lost trying to head to the next town, only to wind up running into a young woman being hunted by a giant bird monster. After losing it in the woods, the lady, named Houran, offers to welcome the Sanzo Party at the mansion of the master she works for, including food & board for the night. Soon enough, though, the truth starts to unravel, as Genzo Sanjo, Son Goku, Sha Gojyo, & Cho Hakkai were lead to this mansion so that the master, Go Dougan, can enact his vengeance on the group, for misgivings he feels they did to him three years ago. Meanwhile, the Kougaiji Party comes across the bird monster themselves, and after dispatching it, follow the Sanzo Party's tracks to the mansion, in order to find out who could even summon such a creature.