They're (Mostly) Not Anime: The Rest of G-Saviour

When it comes down to it all, G-Saviour will always be an interesting part of the Gundam franchise. Though it's now treated like the black sheep of the entire franchise, which is kind of odd when you consider how many questionable things have come from Gundam, it was given quite a lot of focus & promotion by Sunrise & Bandai at the time. Again, this was produced alongside Turn-A Gundam to celebrate the 20th Anniversary of the original Mobile Suit Gundam's debut, so it's not like G-Saviour was made reluctantly. In fact, while international audiences only received the live-action made-for-TV movie, & the PlayStation 2 video game found notoriety simply by being a good game, there was a fair amount of other things produced in relation to G-Saviour. Some of it was in direct relation to the previously mentioned movie & game, while some of it was in fact another notable part of the overall story, & the most recent of them all actually came about in 2013, surprisingly enough.

Therefore, let's do a general overview of what else came about from G-Saviour, and try to figure out just where it truly stands in the canon of Gundam. 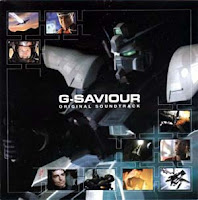 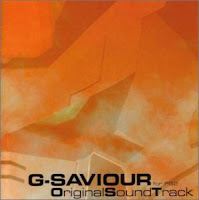 The first to bring up is easily the most important of these other products. You see, G-Saviour was conceived as a three-part story, with each told in a different format. The movie was the middle part, detailing the story of how Mark Curran helped stop General Garneaux's mission to keep CONSENT as the ruler of the people. The game was the final part, detailing how Reed Fox helped bring about the end of CONSENT's tyranny by stopping the dangerous Project Raven led by the rebellious Commander Bais. That just leaves the first part of the story, which was told via its own three-part production as a radio drama. Broadcasting on December 28, 2000, the day before the movie debuted on Japanese TV, the G-Saviour radio drama told three stories whose events lead to the plot of the movie. Obviously, this is the only part of G-Saviour that wasn't performed by English actors first, so everyone is voiced by professional seiyuu, though some characters from the movie do make "appearances". Since I can't really experience these radio dramas for myself in any good fashion (mainly because my Japanese is too rough to enjoy it with just audio), I'll be making educated guesses as to what they may explain, based on the basic concept of each story.

G-Saviour (the Game): The Final Men of UC Destiny

While we here in North America only received G-Saviour in the form of the live-action movie, at least until Yoshiyuki Tomino publicly disapproved of it, in Japan it was more than just a Japanese/Canadian co-production. Over there, Sunrise gave it a fairly notable push, conceptualizing it as a multimedia promotion truly worthy of being part of Gundam's 20th Anniversary Big Bang Project. Aside from the movie, though, the only other product that really gets any recognition is the video game. Developed by game studio/toy manufacturer Atelier-Sai (Cyber Formula ~Road to the Infinity~, Sunrise Eiyuutan, Sunrise World War) & released by Sunrise Interactive (Astro Kyudan: Kessen! Victory Kyudan-hen), G-Saviour was a PlayStation 2 game that saw release on September 14, 2000, a month before the system saw international release. In fact, the PS2 game was the very first piece of G-Saviour to ever see release in general, acting partially as a bit of promotion for the main attraction that was the movie, even though the game takes place after it. As time has gone on, the game has wound up receiving a much warmer reception than the movie, but now that I wound up enjoying the movie more than expected I wonder if the game can live up to the relative praise it has received. Only one way to find out, I'd say... 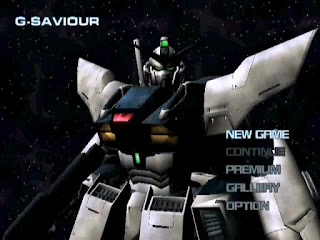 Universal Century 0223, Winter. It's been close to one year since the "Light of Gaea Incident", where Mark Curran helped Side 8 "Gaea" fight back the forces of CONSENT & declare itself a truly independent Settlement, which has started to cause panic among the other Settlements. Colonel Bais Bashing, loyal confidant to the late General Garneaux, has decided to put his secret "Project Raven" into action to enhance CONSENT's military power & quell any more potential rebellion. After finding out about Bais' plan, the Illuminati of Side 4 sends Lightning Squad to Earth to put a stop to Project Raven. With help of his commanding officer Ben Bolt & operator Asaka Field, Reed Fox pilots the same G-Saviour used a year ago to take the fight to CONSENT. To combat Lightning Squad, Bais sends out Gremly Sheep, his own elite squad lead by the shady Rysis, which will require the G-Saviour to be upgraded into the even more powerful G3-Saviour ("G-Third").

Sunrise's Gundam is something that doesn't require any sort of introduction; it's one of the biggest names in anime, let alone mecha. That being said, there is the occasional lesser known or forgotten product from the franchise, like when I reviewed the very silly & fun Model Suit Gunpla Builders Beginning G (the spiritual precursor to the fan-favorite Gundam Build Fighters) back in December 2012. That being said, there is one notorious entry in the franchise that may be too known to be considered "obscure" or "forgotten", but this is something that I've thought about reviewing here for a long whole... And now I have enough to make this worth multiple pieces.

It's time to cover G-Saviour. 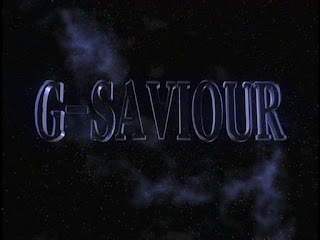 The Gundam franchise turned 20 years old in 1999, & to celebrate Sunrise came up with the Big Bang Project. The main attractions of the project were two new productions, with the first being Turn-A Gundam, a 1999-2000 TV anime which brought back Gundam creator Yoshiyuki Tomino to his baby after a five-year hiatus following the end of Victory Gundam. Today, Turn-A Gundam is considered a cult favorite & saw its first ever international release just last year via DVD. The other product was G-Saviour, a multi-media project, headed up by a live-action movie, that followed the iconic Universal Century timeline. With a budget of roughly $10 million, Sunrise teamed with Polestar Entertainment to produce a ~95 minute, made-for-TV movie that was filmed in English before being dubbed into Japanese for its December 29, 2000 broadcast on TV Asahi. It wouldn't see an actual American release until 2002, but while it received a rave review from ANN's Bamboo Dong back in the day, the movie has become easy cannon fodder for franchise fans. I remember seeing G-Saviour over a decade ago (remember, I am 30, which is "old" for anime fans), but I think it's time to finally give it another go. Is it truly as embarrassing as most Gundam fans treat it, is it simply your usual made-for-TV movie, or is it actually better than you might think?

Universal Century 0223. The Earth Federation has collapsed & the "Side" space colonies have become independently run Settlements. From this has formed two sides: The Congress of Settlement Nations, or CONSENT, which governs Sides 2, 3, 5, 6, 7, & Earth, & the Settlement Freedom League, which is comprised of Sides 1 & 4, plus the Lunar Cities. Ex-CONSENT pilot Mark Curran works at a sea lab for Hydro-Gen, a corporation that hopes to utilize hydrogen to help fight the Earth's dwindling ability to produce agriculture. One day, Mark winds up helping a CONSENT pilot whose Mobile Suit crashed into the sea, before the lab becomes commandeered by a Congressional task force lead by Jack Halle, Mark's former commander. The lab also gets invaded by spies from Side 8, Gaea, shortly after Jack arrives. While Jack's forces kill one of the intruders, Mark is able to save another, Dr. Cynthia Graves, which is only the start of his journey that will put him against Jack & General Garneaux of CONSENT, due to their goal of getting a hold of a secret experiment that could change the power balance of the Universal Century.

Anime licensing companies have come & go in the history of the North American anime industry, and when they do go away it's usually in one of three categories. Some, like Bandai Entertainment, Central Park Media, or Geneon Entertainment, leave behind a legacy of greatness & maybe even innovation. Some others, like AnimeWho or ArtsMagic, die quietly after only a few releases, only to be brought up by oddball wannabe historians, like myself. Others still, though, wind up being remembered for having absolutely no idea as to what they were doing in the first place. A perfect example of that last category would be Illumitoon Entertainment. Formed in 2006 by FUNimation co-founder Barry Watson, Illumitoon's "Not-So-Rise & Absolute-Fail" was something I covered back in 2011. In the short couple of years the company actually mattered, it managed to get one DVD out for three of the anime it licensed (Bobobo-bo Bo-bobo, Beet the Vandel Buster, & B't X [this one got two]), but there was a fourth anime picked up by Illumitoon that never saw any sort of release in North America, or at least one on home video. It did see a year-long stint on The Anime Network in 2008 when it was still an On-Demand TV cable service, alongside B't X, but even that was dub-only & lasted for only 14 episodes.


I think it's time to finally give AM Driver it's (partial) due, because Illumitoon never did. 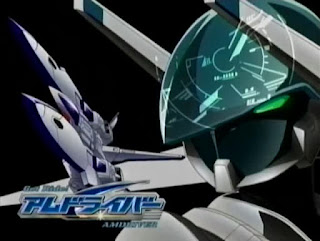 Running from 2004-2005, Get Ride! AMDriver was a 51-episode TV series that actually ran in a prime-time slot on TV Tokyo, 18:30/6:30 pm, replacing Croket! before being itself replaced by The Law of Ueki. Animated by Studio DEEN & directed by Yuji Yamaguchi (the man behind DEEN's Fate/stay night anime productions), under the name Isao Torada, the anime was part of a multi-media franchise that featured a kids manga & even a PS2 game & toys developed by Konami; some of the staff involved in the toys would go on to work on the Busou Shinki product line. In terms of attention outside of Japan, there was a single episode fansubbed back in the day (to my knowledge, at least), showing that next to no one really cared about it. There was a Hong Kong bootleg DVD set, though, that covered the first 13 episodes, so while I prefer to not have to rely on bootleg English subtitles anymore, I have absolutely no other choice here; at least the subs here work well enough, if maybe a little too literal. Sadly, the dubbed episodes are nowhere to be found, so I can't judge that product, nor can I cover episode 14, but let's see if there was even any potential to be found in the first quarter of AMDriver. Did Illumitton put money down on this anime because of any actual quality, or was Barry Watson simply hoping for a multi-media product, like it was in Japan?

It's been ten years since the Bugchine, a mysterious race of monster, invaded Earth. To combat the Bugchine, an organization was formed that was made up of armored warriors named AMDriver. Instead of simply being a combat troupe, though, AMDriver is a government-funded cadre of various "depots" made up of small units of AM Drivers that both work together as well as compete with each other. Units that do the most Bugchine destroying get more funding, not to mention become more & more popular with the general populace due to their battles being televised live. After two years of training, Jenus Dira, Ragna Laurairia, & Sera May officially join AMDriver's Little Wing depot, where they quickly learn just how the various AM Drivers themselves handle their jobs. When a trio of other armored warriors make their moves against the organization & a force called the Justice Army comes in, though, Jenus & his friends start to wonder... Is AMDriver really about protecting the people from monsters, or is it nothing more than a way to placate the populace & keep them under the control of the government?