Post-Apocalyptic visions of the future have been around in fiction for longer than anyone can remember, & Mary Shelley's The Last Man from 1826 is generally considered the first "modern" example of the genre, but in the past 30 or 40 years it's really started to become much more focused, defined, & expected. Today, it's easy to think of fallout-riddled wastelands filled with road warriors & legendary omega men that roam about metal jungles on planets of new dawns due to the fact that war never changes. Out of all of the countless takes on the post-apocalypse, though, one has always dared to be different, challenged the status quo, and found no hesitation in being the most bizarre of all... 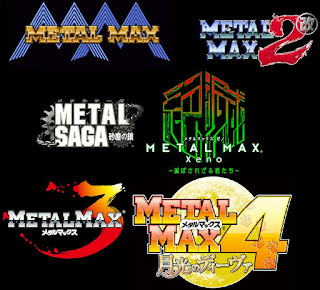 In 1986, Hiroshi Miyaoka was a 27-year old college drop-out from Shinjuku's Waseda Unversity, working as a "free writer" for video games. He eventually was brought on to work as a scenario assistant & dungeon designer for a new RPG on the Nintendo Famicom being lead by Yuji Horii, a friend from his little "Wizardry Club"; the game was called Dragon Quest. Yes, Miyaoka was a part of the iconic franchise's earliest days, and wound up being an essential part of "The Roto Trilogy" that comprised the first three games. Following the release of Dragon Quest III in early 1988, though, Miyaoka decided to start up his own development studio, Crea-Tech, with the intention of creating his own RPG. Unlike Horii's creation, however, Miyaoka's would be the complete opposite, conceptually; ads for the game even said, "We've had enough of dragon slaying!". Where Dragon Quest was generally linear & fantasy-based, this new RPG would be as non-linear as possible & influenced by post-apocalyptic works, like George Miller's iconic Mad Max Trilogy. In fact, Crea-Tech made no attempt at hiding the influence of those movies, because the game would be called Metal Max.

With today marking the English release of Metal Max Xeno, the latest entry in the franchise, I figure now is the perfect time to give a detailed overview & retrospective on Metal Max, from it's humble start on the Famicom, to the death of its original trademark holder & creation of an offshoot series, to its revival for the modern era. So let's head out in our tanks, with our rocket launcher-strapped dogs, & get into a "Battle with the Wanted"!

I've mentioned this on the blog before, but Saint Seiya is NOT how I got into the works of Masami Kurumada, which is totally unlike most people around the world. I remember seeing ads for DiC's Knights of the Zodiac back it was getting ready to air in 2003, and they didn't make me interested at all; rather they made me actively want to avoid it. Now that I've just seen that dub, though, I worry that, had I seen it back then, I'd have never given anything else by Kurumada a chance. After I started becoming a full-on anime fan in 2004, though, I started looking for shows to see via fansubs, and one that caught my eye was B't X (pronounced "Beat X"); if anything, the interesting spelling made me curious. At first, I was hesitant, especially after finding out that it was from the same creator as KotZ, but I decided to not hold this anime accountable for something that I had no interest in seeing, so I watched it. Needless to say, I really enjoyed what I saw, & after then giving the Ring ni Kakero 1 anime a try & liking that, I finally decided to give Saint Seiya a try, but through the manga this time around. Now, 14 years later, I'm a true-blue "Masamist", though today Kurumada seems to prefer the term "mabudachi/true friend", according to his site.

Of course, little did I know until recently that I actually first "saw" B't X via one of its Newtype Magazine posters making a cameo in M. Night Shyamalan's Unbreakable, years before it first became officially available North America... So maybe me becoming a Kurumada fan through B't X was just my destiny. 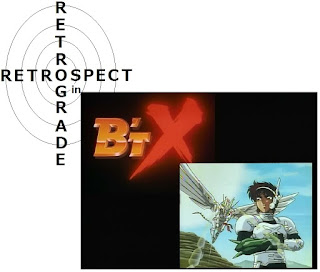 Therefore, when Illumitoon Entertainment announced in 2006 that it would be releasing the B't X anime on DVD here in North America, I was ecstatic. So imagine my disappointment in 2007 when Ilumitoon's first release, Beet the Vandel Buster Volume 1, came with "dubtitles" in place of proper subtitles (which weren't even timed to the Japanese audio!), an English dub that jammed in its own music, & the original Japanese OP & ED sequences being tossed aside as extras with video encoding so poor that I think I could have done a better job back then. Granted, B't X's first DVD didn't have that last problem, but the other two were still there, and with a sad heart I refused to buy it. To no surprise, Illumitoon stopped putting out DVDs before the year was over, with one of the final releases being B't X Volume 2, which was at least a proper release with accurate subtitles (plus a silly "from Masami Kurumada" on the top of both the cover & the DVD itself); it was too late by then, though. Then, in 2008, it was announced that B't X & AM Driver's dubs would be made available on-demand via The Anime Network, just for people to eventually realize that Illumitoon only dubbed up to Episode 14 for both shows. Since then, TokyoPop showed one last hint of a heart by finishing up the B't X manga in late 2010, following a two-year hiatus, and after that I pretty much gave up hope for B't X ever being given another chance here... Until 2016, that is.

At AnimeFest that year, Anime Midstream announced that it would releasing B't X on DVD in North America, complete with a brand-new English dub, and said release finally happened just last month in the form of a complete TV series boxset; in fact, it even became the #4 Best-Selling DVD release at Right Stuf for a week or two! So I think it's time for me to revisit the anime that started my path to becoming a fan of Masami Kurumada for the first time in roughly eight years, and see if it still makes me feel the same way it did back in 2004. Also, I want to see what Anime Midstream & Sound Cadence Studios brought to the table with this new English dub, & I even decided to buy those two Illumitoon DVDs so that I can finally see what the original dub was like for the first eight episodes. Battle Gear... ON!!!!

Licensed properties can sometimes be a tricky thing to work with, especially since it's owned by a different party than the one working with it. In fact, sometimes said licensed property can be taken away from the production, which just throws a giant wrench into the works. A perfect example would be cult-classic 1990 NES game Journey to Silius, or Rough World in Japan, which was initially meant to be based on The Terminator, but had to be altered after Sunsoft lost the rights. Now while this resulted in the plot of the game having to change, there are still some bits & pieces in the game that hint at what it was originally meant to be, simply because it'd be impossible to remove or alter every little aspect before release. It does make one wonder, though, if something like this ever happened with anime. Well, at least according to various Japanese blogs & even Wikipedia Japan, there might just be an instance of an anime getting the Journey to Silius treatment...

I've written numerous times about the late 1997 TV anime Next Senki/Record of Next War Ehrgeiz before, & how I will forever have a soft spot for it, even though it's been completely forgotten with time; it just "clicks" with me. Now when it comes to the first ever mech anime to air in late-night, most people will quickly assume that it has an association with the 3D fighting game of the (almost same exact) name, 1998's Ehrgeiz: God Bless the Ring, especially since the game came out in arcades around the same time the anime was receiving its (only) home video release in Japan. Those people would be wrong, though, since the two Ehrgeiz-es have absolutely nothing in common, aside from both using the German word for "ambition" in their titles; they also share a couple of voice actors, coincidentally. But what would you say if the anime may actually have a link to another video game, one that is mech-based? Specifically, was Next Senki Ehrgeiz really an aborted adaptation of Capcom's Cyberbots?

For those unfamiliar, Cyberbots: Fullmetal Madness originally came out in April 1995 for Capcom's CPS2 arcade hardware, & was a 1-on-1 fighting game where you took control of giant robots piloted by a variety of different characters; it was the spiritual successor to 1994 beat-em-up Armored Warriors, as they used the same mechs. While it did become a bit of a cult favorite over time, today it's best known as the game that Marvel vs. Capcom 1 & 2 pulled Jin Saotome (& his mech Blodia) from. Unlike most Capcom fighters of the time, though, Cyberbots wasn't ported to home consoles for a whole two years, with the first being the Sega Saturn version on March 28, 1997. Now, in terms of any relation to Next Senki Ehrgeiz, the Saturn port still predated the anime's debut later that year on October 2, but the second console port is where things get interesting. You see, the Sony PlayStation wouldn't see a port of Cyberbots until December 25, 1997... The same day (sort of, since the show aired at "25:15" on December 24) that Ehrgeiz's final episode aired on TV Tokyo! While one can chalk up the port's delayed release down to the PS1 not being as friendly for 2D fighting games, though the Saturn version didn't require the RAM expansion cart to play (it did improve performance, however), maybe the port was also delayed so that an anime adaptation could be made to help promote it... At least, that's if these Japanese blogs are correct. So, to change things up for Theory Musing, allow me to ruminate on a theory made by others & see if there's something to this idea that Next Senki Ehrgeiz was originally meant to be a Cyberbots anime.