Obscusion B-Side: The Death Crimson Retrospective That Destroys Your Soul!

If you haven't noticed, I've been trying to do more Obscusion B-Side pieces in general, and so far this year all but three months have had either a B-Side or a B-List. Aside from trying to create some sort of consistency, there's another big reason for this: I wanted to hit my 20th B-Side this year. While I'm not sure if I'll do this like I do with my reviews, I thought that (since I don't do these quite as often) I should make every 20th piece a milestone for Obscusion B-Side. And since I was able to time this for Halloween, how about we look back at something horrifically terrible?


"The Emperor of Crappy Games", "The Lowest Emperor", & "Master Death"... They all are used by Japanese video game fans online to describe a single game: Death Crimson. A video game so infamous that even saying just its name can potentially deliver psychological pain to certain people. Housed within a single CD is a game for the Sega Saturn generally considered one of the absolute worst of all time, and I'm not doubting or refuting that consensus. That being said, though, there is more to Death Crimson than just a single game, but very few tend to put any focus towards the rest. Therefore, to celebrate 21st Anniversary of Death Crimson, which happened back on August 9 (the day the first game came out in Japan), I want to go over all three games in this infamous series. Did things improve in any way with time, or are all three worthy of such imperial nicknaming? Also, why the 21st Anniversary? Because I missed the actual 20th last year, though I think drinking age should be the more appropriate time to look back at something like this.

Before we get to Death Crimson, though, let's first quickly go over the man & development studio behind it...

I started Demo Disc with Volume 1, a focus on mech anime that I otherwise would not normally be able to cover here on The Land of Obscusion, & I did more of that for Volume 5. I had planned on doing the same for this volume, but something very interesting has happened in the past number of years. With simulcasting all but killing the concept of fansubbing anime as they air in Japan, though scumbag rippers & illegal streaming sites have pretty much taken that spot, the few fansubbers still around have quietly moved on to anime of the past, and mecha has seen a lot of movement on that front. For example, every single entry in the Brave Series has an unofficial English translation now, and stuff like that has effectively removed a lot of previously unfinished anime for me to cover via Demo Disc; I can still return to that genre exclusively at least one more time, though. Therefore, for this eleventh volumes, I decided to go with a more overarching motif: Guardians of the People!


Record of Life
Not counting the bonus at the end, Volume 5 of Demo Disc, Rowdy Robos, finished with a look at the first episode of Tetsujin 28 FX, the early 90s far sequel to the "originator" of giant robots in anime & manga created by Mitsteru Yokoyama. Therefore, let's start off this volume with a look at where the genre all began. Tetsujin/Iron Man 28 debuted back in mid-1956 in the pages of Kobunsha's manga magazine Shonen (not to be confused with Kodansha's Shonen Magazine, which debuted three years later). The manga would run for 10 years, ending in mid-1966 after 24 volumes. It was first adapted to television as a live-action drama that ran for 13 episodes in 1960, but in 1963 it became one of the earliest TV anime ever produced, running until 1966 for 97 episodes & featuring animation by the Television Corporation of Japan/TCJ, now known simply as Eiken. It would start being exported internationally under the name Gigantor the next year, but only 52 episodes wound up getting dubbed. In fact, the first episode just celebrated its 54th anniversary earlier this month (October 20, to be exact), so let's see how the very first giant robot anime got its start!

At Otakon this year, one of my favorite panels I attended was the Right Stuf panel, and one of the most interesting announcements made there was that Aria the Animation would receive an English dub if a Kickstarter drive for the new Blu-Ray release was to succeed. I knew that Aria in general had a fervent fanbase, so my immediate feeling upon hearing "Dark Lord" Shawne Kleckner announce this drive was, "Oh, this is going to succeed, easily." 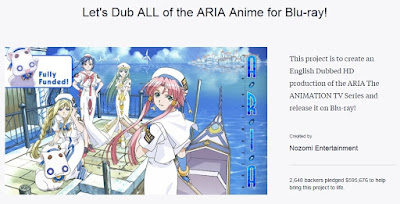 That being said, even I couldn't imagine it earning nearly four times its initial goal, resulting in every season of the Aria anime, including the previously unlicensed Aria the Avvenire OVA from 2015, receiving an English dub. I have nothing but happiness for the fans of this anime series (I'm personally fine with the DVDs I have yet to watch), but at the same time it started to make me think. Are anime crowdfunding successes like Aria an indicator that there is potential for smaller name & niche anime to be given chances that they would normally never be given outside of Japan, or is this just more proof that these can only reliably succeed for titles that already have existing fanbases to support them in the first place? Before all of that, though, let's start at the beginning...

If you somehow aren't familiar with Kickstarter, it's a site where people & companies can start drives that requires the general public to pledge funding to in order to achieve a required goal. While there are other sites like it, such as IndieGoGo or Fig, KS has the most notoriety behind it, and even recently has started allowing drives based in Asia. Eventually, the Japanese anime industry would come to notice the potential of crowdfunding, & on October 1, 2012 Production I.G. teamed with director Masaaki Yuasa to crowdfund an original OVA short titled Kick-Heart. With a goal of $150,000, the OVA would earn over $200,000, which resulted in it being two minutes longer than initially planned & even receiving two English dubs (one professional & with one with backers voicing the cast); I not only supported this drive but also reviewed it back in July of 2013. The success of this drive has since opened up the gates for anime crowdfunding, with successes like Santa Company, Under the Dog, Mecha-Ude, Nekopara, Cannon Busters, & others which were done via Japan-exclusive sites, but I'll only be focusing on Kickstarter campaigns here.
Read more »
Posted by George at 7:44:00 AM 1 comment:

Spectral Force (OVA): The Beginning of "The Ed Wood of Anime"

So a few weeks ago I reviewed Spectral vs. Generation, a 2D fighting game that crossed over characters from Idea Factory's IF Neverland brand. While that game in particular never saw release in North America specifically, the franchise itself actually had a curious introduction to the English-speaking market, but first some quick history. Technically, the first game in IF Neverland was Idea Factory's second ever game, 1996's Spectral Tower, a dungeon crawler that took place in the fantasy world of Neverland. That being said, though, the game didn't really define anything in particular about the world it took place in, & would be effectively replaced in the actual canon by 1998's Spectral Tower II, so one can argue that IF Neverland as a franchise & brand actually started 20 years ago. The game in particular was Spectral Force, released on October 9, 1997, which was essentially the spiritual successor to Sega's Dragon Force on the Saturn. You see, developer J-Force was on the verge of bankruptcy during development and, after numerous months of unpaid work, a lot of the Dragon Force staff left & joined Idea Factory to make Spectral Force; Sega's Kansai branch would finish the original game (& then develop the 1998 sequel). 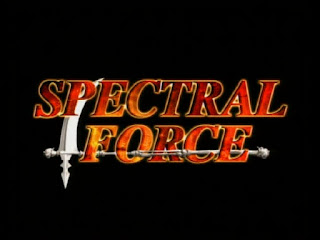 However, Idea Factory's founders, Shingo Kuwana (formerly of Data East) & Yoshiteru Sato, had plans to be more than just a video game studio, & Spectral Force would be the start of IF's multimedia expansion. While the game itself featured a very rudimentary anime opening, when it came to the release of Spectral Force 2 in October of 1998 Idea Factory produced two adaptations of the original game. There was a manga drawn by character designer Shinnosuke Hino, which ran in Shinseisha's Comic Gamest & was compiled into a single volume by Koei, while Idea Factory itself would make a two-episode OVA for release on VHS... Yes, a video game company decided to make an anime on its own; both episodes would then be released on a single DVD in 2001. At Anime Weekend Atlanta 6 in 2000, ADV Films announced plans to work with publisher Studio Ironcat to bring over Spectral Force, with ADV handling the OVA & Ironcat dealing with the manga; according to the news, the game was even planned for release. A year later, at AWA 7, Studio Ironcat revealed that the manga was ready to go & would even be part of a giant package containing the game, OVA, & manga; likewise, ADV's dub & subtitle work was finished (at least, that's what the copyright says). Unfortunately, Ironcat was in a very rough place at that time, so the manga never saw release. In the end, ADV would be the only company to release anything from the deal, though for whatever reason it wouldn't be until mid-2003 via dual-audio DVD, three months after Xicat Interactive had released Black Stone: Magic & Steel on the Xbox, which is technically the first IF Neverland game to be released in North America & Europe (though the Japanese release, titled Ex-Chaser, would come later & actually make it a proper entry for the brand).

Since then, the Spectral Force OVA has gone down as one of the worst anime ever officially released in North America. Still, I want to celebrate what I consider the "proper" 20th Anniversary for IF Neverland, so since I can't really play the game (it's very menu-based, so a good familiarity with Japanese is essential), let me see what happens when a video game studio tries its hands at making an anime for the very first time... If it's anything like most of the other Idea Factory anime I reviewed back in 2013, then I'm not expecting much.