Hunter X Hunter (you don't pronounce the "X" in the middle) is probably the longest-running-but-not-really-running manga in history. Debuting in Weekly Shonen Jump magazine back in March of 1998 this was the third title from Yoshihiro Togashi, who hit it big back in December 1990 with Yu Yu Hakusho and spent a couple of years between these two titles with Level E (which had an anime adaptation just this past winter). The basic story is about a boy named Gon Freecs, who finds out that his father Jing, who is very rarely home, is actually a hunter; in the HxH world, "hunters" are people who are pretty much freelance professionals. They can be well-versed in almost anything, from actual "hunting" to food research. Gon decides to become a hunter himself so that he can find his father. 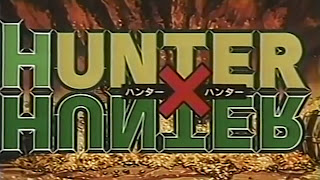 Anyway, this manga became very popular and Togashi has very special treatment with the brass at Shueisha. Unofficially called "Togashi-ism", the man is allowed to take year-long+ breaks without actually doing anything, followed by doing the manga for a few months and then going back on break. But let's get back to the actual review. Pilot films aren't exactly common in anime, but they do happen often enough. Hell, the Dororo anime from the late-60s had a pilot film first, and it was even in color whereas the TV series was done in black & white (which was apparently a cost-cutting decision). Anyway, before Shuiesha now has festivals at the end of each year called Jump Festa, and often pilots are made for anime that haven't been given actual anime yet; Toriko, Eyeshield 21, and Gintama all have gotten this treatment. But before Jump Festa there was JSAT, or the Jump Super Anime Tour. In 1998 three Jump manga received pilots: One Piece (which needs no explanation), Seikimatsu Leader-den Takeshi (which was from the then-future-creator of Toriko), and Hunter X Hunter. The biggest trick with pilots are that info on them can be scarce, but let's take a look at the Hunter X Hunter 1998 JSAT Pilot.

This pilot adapts the very beginning of the story, where Gon catches a dangerous, giant fish as part of a deal he made with his Aunt Mito. Since he caught it she allows him to take the Hunter Exam, an extremely dangerous series of tests which people have to pass to become hunters. He gets onto the boat which will take him to the country where the exam will be held and meets Leorio and Kurapika, two men who also want to become hunters for their own personal reasons. Suddenly, the ship is hit by a mysterious force and the three have to work together to survive. Fans of Hunter X Hunter will recognize this part of the story, and I'll admit that I've only watched the anime so I can't tell which version of this early part of the story is more accurate to the manga. Still, it's a pretty different version of the story that the anime also did in episode 2, so I found it a neat watch. And that's really what this pilot comes off as: Familiar, yet different.

Whereas the TV anime adaption was made by Nippon Animation, this pilot was made by Studio Pierrot, who you'll easily recognize as the studio behind the anime adaptations of Bleach, Naruto, Beelzebub, Level E, and many other manga. The overall look and style of Togashi's creation is mostly the same, but with some slight differences, obviously. The animation in general looks a little more fluid here than in the TV series, but that's mainly because this pilot has a bit more action than how the TV series handled the story. The only name I can find out about this pilot is that it was directed by Noriyuki Abe, who also directed the anime for Yu Yu Hakusho, Ninku, GTO, and has been the director for Bleach. If anything, Abe handles the more action-packed version of the story, but aside from that it still feels like Hunter X Hunter, which is good. Though I can recognize some of the voices in this pilot, I can't recognize them enough to tell who exactly did the voices here. The voices from the TV series simply became the voices you immediately think of for this series, but these original choices certainly didn't disappoint. The music, likewise, works well but isn't anything truly memorable in the end, especially since this is the only time you'll ever hear it. 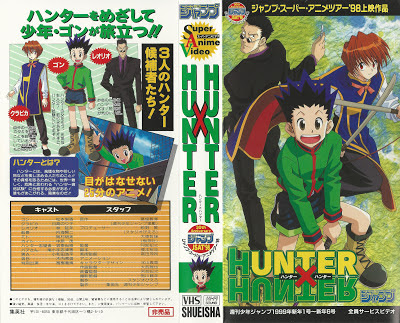 Overall, the Hunter X Hunter 1998 JSAT Pilot is only going to appeal to fans of HxH, though I can certainly see it be used as a way to introduce people to the series, unlike the Ring ni Kakero 1 Pilot Film, which was simply fanservice. It's obviously not the same title you might have watched before, but at the same time it still feels familiar enough to eventually get used to. I have seen the One Piece pilot before, though it's been a few years, and I do have a raw for the Takeshi pilot, so maybe I'll review them sooner or later as well, but with the Hunter X Hunter manga coming back once again from it's latest hiatus I felt that it was a good time to review this pilot. Now maybe Togashi can actually finish up the story he's been on for the past few years before going back on hiatus...
Posted by George at 9:04:00 PM