Mars of Destruction: Can "Bad" Be Overrated?

While most of Idea Factory's anime output is based around the IF Neverland franchise, there are a few that are based on other titles. For example, before IF's Otomate brand, home of visual novel series like Hakuoki & Hiiro no Kakera, there was IF Mate, which was made up "adventure" games (i.e. visual novels, but not the bishojo kind) like Steady X Study & the video game adaptations of anime like Bludgeoning Angel Dokuro-chan & REC. In 2005, the last year Idea Factory would release anime, there was a game in the IF Mate label called Hametsu no Mars/Mars of Destruction, an adventure game with a sci-fi influence. Two months after the game came out, it received a 20-minute prologue OVA, and nowadays it is considered one of the absolute worst anime ever made. Hell, it even has the "honor" of being the #1 Worst Rated Anime in the ANN Encyclopedia, beating out the likes of Reign: The Conqueror, the Tekken anime, Psychic Wars, & even SD Gundam Force! Technically, this anime is so infamous for being bad that it's probably too well known to even talk about here, but since I'm on an Idea Factory anime binge I might as well review it myself... And then there's the fact that if there is such a thing as "Overratingly Bad" (a.k.a. it's 'badness' is highly overstated), then this is probably the poster-boy for it. 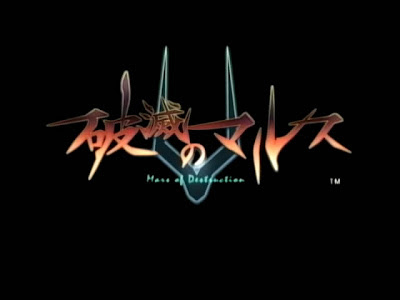 In the year 2010 (you know, the future), mankind sent its first human-piloted ship to Mars, the Mars Exploratory Vessel, and on its re-entry to Earth the vessel exploded, with parts of the vessel crashing to the planet. A few months later, Tokyo becomes attacked by mysterious beings that are being called "Ancients", and to combat them an organization called AAST (Anti-Unidentified Ancients Special Team) is formed, comprised of experts in fields such as firearms, information retrieval, & hand-to-hand combat. Also within AAST, though, is Takeru Hinata, who has been chosen to use AAST's last-resort: MARS, a special combat suit that Takeru seems to be the only one who can use it without dying. While delivering pieces of the vessel for transport to America, the AAST crew are attacked by a special form of Ancient... Who reveal to them that the Ancients are actually the true Earthlings, and humans are actually the race that came from Mars and invaded the Earth with a deadly virus.

Admittedly, that twist at the end of the OVA is a neat one, even if Xevious had already done it, and the general idea of the plot sounds cool. But, to be honest, this prologue's biggest problem is that it is simply boring... And bland... And not terribly interesting. It explains some of the basic stuff you need to know right now, while teasing secrets that the game would obviously explain, but it doesn't do much else than that. You don't really get any idea regarding the relationships between Takeru & the many girls that make up AAST, outside of a quick shot at the end that kind of hints that him & the pink-haired Yamabuki might have feelings for each other, you don't get any explanation as to how the MARS suit works, and the Ancients just seem to simply appear in Tokyo. Yes, this is poorly done, and as a piece of promotional work it does indeed fail in that regard, but at the same time the end result is more "bland" than "bad". 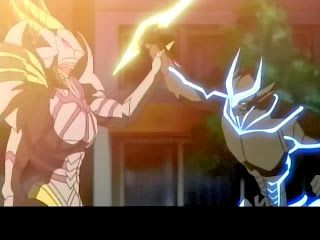 How about the animation? Well, it seems to be par the course for Idea Factory anime (animated characters on top of CG backgrounds), but nothing about really seems all that bad. The CG mixes in okay with the animation, and there are some short clips that look cool, especially a scene where a bunch of Ancients literally rip apart a police officer; it should be noted that this OVA isn't solely an Idea Factory production, as they did have help this time by WAO! World, which is normally a key animation studio. Visually, Mars of Destruction looks average: Not horrific, but nothing special either. It's simply there, but at least having an actual animation studio puts it above most of Idea Factory's personal output, so I guess that's a (faint) positive in the grand scheme of things. If there is one odd thing to point out, though, it's the fact that the video seems to be full-screen, yet the bottom sixth-or-so of the screen has this odd black bar that never goes away; I've heard of letterboxing & pillarboxing, but this is half-heartedly ridiculous. Compared to animation like what you could find in a production like Gundoh Musashi, Mars of Destruction's animation is serviceable, and compared to most of the Idea Factory animation that came before it, it's actually a notable step up.


Maybe it's in the audio... Or what little there is here. Really, most of this OVA has no music playing at all, and when there is music it's actually all classical music. Yeah, in this OVA you'll hear songs like Wagner's "Ride of the Valkyries" & Beethoven's "Moonlight Sonata", among a couple of others. Unfortunately, they're kind of shoehorned into scenes, with three of them even being awkwardly transitioned into each other during one scene at the end. Well, okay, I'll give the infamy that, at least: The music isn't really handled well. The voice cast is made of the likes of Erina Nakayama (Freesia Yagyu in Jubei-chan 2), Minori Chihara (Aya Natsume in Tenjho Tenge), Asuka Aizawa (Yamabuki, the female voices in the Blame! ONA), & Kaori Nazuka (Nunally in Code Geass), alongside anime one-timers Yukari Kawabuchi & Nozomu Taiga (Takeru), who all put out workable performances. Again, nothing special but nothing horrible here.


I'm sorry, but how is the Mars of Destruction OVA worthy of being called one of the "Worst Anime of All Time" again? Sure, it's not a good anime by any measure, and as a promotional prologue it bombs rather hard, but rather than being downright "bad" in every regard, it's simply boring & bland, which is kind of sad considering the potential the idea behind it has. I'd imagine the game, which fuses together visual novel sequences with timing-based first-person RPG combat, is an overall better product. Compared to other Idea Factory anime, it definitely is an absolute low point, beating out Generation of Chaos Next & maybe even Gakuen Toshi Vara Noir, but there is no way, and I mean NO WAY, that this little production is worse than the likes of Gundoh Musashi or the Panzer Dragoon OVA. Given that it was animated by WAO! World, it's at least semi-competently made, but it's just boring to watch and doesn't do a good job at all at getting one interested in playing the video game. Admittedly, the game has no English translation, but one could at least play Chaos Wars, which features Takeru as a playable character & the Ancients (literally translated as "Ruins Denizens") as enemies; in fact, Takeru is a really strong unit in that game, making him useful to sortie. Regardless, the Mars of Destruction OVA is completely forgettable and not worth watching at all, and its infamy as being one of the worst anime of all time is a complete overreaction that borders on being worthy of the term "overrated" in a weird inverse sort of way. It's received its infamy through internet culture & people who simply are either looking for an easy target, or are simply parroting what others have said before.

Make no mistake: The Mars of Destruction OVA is capital B-A-D... But it's not the "Worst Anime of All Time", not by a long shot.
-----
Now, before I start going into the theme of reviews that will lead into Review #100 I do have one more Idea Factory anime I want to review...  And it's a title one that I've wanted to review before but couldn't.  Also, it's proof that Idea Factory did in fact make anime that wasn't simply a promotion for a video game.
Posted by George at 8:20:00 PM